Use your automated calf feeder to better manage calf health

Deciding which data and alerts to pay attention to can be overwhelming. This post will help you know how to use the information to monitor calf health.

Deciding which data and alerts to pay attention to can be overwhelming. This post will help you know how to use the information to monitor calf health.

Use Your Automated Calf Feeder to Better Manage Calf Health

Deciding which data and alerts to pay attention to for calf health can be overwhelming. This blog post will summarize what we know about milk intake, drinking speed, and visits to the calf feeder in relation to disease detection and milk feeding strategy.

From the Calf Go app, these abnormal behavior alerts are signaled by an exclamation mark or shaded bars (Figure 1). These behaviors are useful because researchers observed that calves decreased their milk intake, drinking speed, and unrewarded visits for a few days before diagnosis with diarrhea or respiratory disease when compared to healthy calves. However, we caution that feeding behavior cannot replace visual health exams of healthy (Figure 3) or sick (Figure 4) calves. The value of feeding behavior is dependent on how the automated feeder is programmed. For simplicity, we refer to studies which offered calves ≤ 8.0 L/d milk as limit-fed, and ≥ 10 L/d of milk as biologically normal feeding plans.

Figure 2. A healthy calf with balanced ear posture, bright eyes, and no cloudy discharge from the eyes or nose. 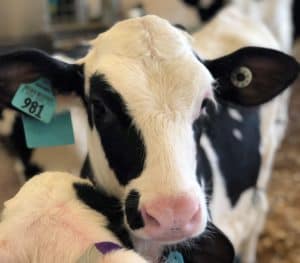 Figure 3. A sick calf with unbalanced ears, sunken eyes, and cloudy discharge from eyes and nose. More information about visual health exams can be found here. 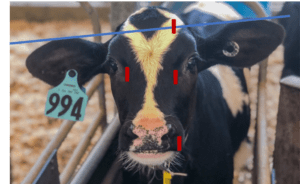 It appears that feeding behavior is more useful for detecting diarrhea compared to respiratory disease for limit-fed calves. In a large study of over a thousand calves, calves decreased their milk intake, drinking speed, and unrewarded visits up to three days prior to diagnosis of diarrhea compared to healthy calves. In contrast, calves only decreased their drinking speed on the day of respiratory disease diagnosis compared to healthy calves (Knauer et al., 2017).

No relationship with disease status has been observed for rewarded visits in limit-fed calves (Morrison et al., 2021). However, unrewarded visits are dependent on the minimum and maximum meal size, stocking density per nipple, and the amount of milk offered per day.

We suggest that for limit-fed calves, milk intake and drinking speed are the best feeding behaviors to monitor and use for alerts. It also appears that limit-fed calves have more apparent changes in their feeding behavior before diarrhea rather than respiratory disease. More research is needed to determine how much of a decrease in milk intake and drinking speed is indicative of diarrhea or respiratory disease in the days leading up to disease diagnosis in calves.

Calves enrolled on biologically normal feeding plans have multiple changes in their milk intake, drinking speed and unrewarded visits prior to diagnosis of disease. For example, in calves offered unrestricted amounts of milk, milk intake and rewarded visits decreased on the day of diarrhea diagnosis compared to healthy calves (Conboy et al., 2022). Milk intake and grain intake were lower for up to five days before respiratory disease diagnosis compared to healthy calves, plus these calves also decreased their own unrewarded visits at three days before disease diagnosis (Cantor and Costa, 2022).

These findings regarding respiratory disease are consistent among many studies with calves offered higher planes of nutrition (Morrison et al., 2021). There is also early evidence that algorithms which use multiple behaviors together such as milk intake, drinking speed, starter intake and unrewarded visits can accurately label a calf with respiratory disease as early as six days before diagnosis.

We suggest that changes in milk intake and drinking speed occur much earlier for the days before respiratory disease diagnosis in calves enrolled in biologically normal feeding plans compared to diarrhea. However, similar to limit-fed milk strategies, the amount of change in behavior that should be used to detect disease is still unknown. Current ongoing research at University of Guelph is working on developing a feeding behavior alert for the automated feeder to accurately detect sick calves in the days leading up to diarrhea.

There is also early evidence that feeding behavior might help find calves requiring a second antibiotic intervention for respiratory disease. Calves who required a second antibiotic treatment for respiratory disease had reduced milk and starter intake, slower drinking speeds, and less unrewarded visits in the 10 days after treatment when compared to treated calves who recovered within 10 days (Cantor et al., 2022), plus these calves decreased their own drinking speed, and starter intakes as early as three days after treatment for disease. Thus, feed intake and unrewarded visits appear to be useful feeding behaviors to monitor in calves enrolled in biologically normal feeding plans, especially regarding respiratory disease.

How should we use the autofeeder data?

So, what does this mean for producers today? Which behaviors are useful is dependent on the disease of interest, and how much milk is offered to the calves. The app and automated feeder alerts should be used as a screening tool. We suggest that these alerts cannot replace visually inspecting calves, but that monitoring individual calves for changes in several behaviors collectively may flag a calf who might get sick.

It appears that milk intake and drinking speed are the most robust behaviors, but if a limited feeding plan is used changes in these behaviors are better indicators of diarrhea than respiratory disease. The opposite is true for biologically normal feeding plans, where calves changed their milk intake and drinking speed several days before respiratory disease. Automated milk feeders are an excellent tool for top-notch producers to monitor calf behavior, but no technology can replace regular health monitoring and calf management.

Hi, I’m Dr. Bob James… and welcome to the Calf Blog. In partnership with Foerster Technik, our goal is to help you better manage your calf program with practical solutions… More

Welcome to the CalfBlog FAQ section. Here you will find relevant information and assistance on calf rearing.